This is my first time back in the Philippines in about 10 years. Back in the province, life is very simple. I wake up around 5 a.m. (which is very different than my typical vacation wake=up time of 3 p.m.) and sleep around 9 p.m. I enjoy this type of lifestyle. Similar to every night, I go about my usual sleep routine. I sleep next to my lola (which means grandma) on the bed and my niece, aunt, and cousin sleep on the floor in the same room. My relatives are so kind that they would make sure that my immediate family and I got the beds. One night I suddenly felt my lola move. My lola is the stillest sleeper I know so I would be conscious of her movement so I can check up on her. As I am waking up I hear awful scream crying. I noticed that my 86 year-old lola is reaching for my 2 year-old niece who is wailing. My lola has 9 kids so I can see how alert she with taking care of babies. However, my lola has REALLY bad hearing. Her eardrums are almost completely broken, so I wondered how she heard Andrea (my niece). It is either God woke my lola up or I am a really deep sleeper. At this point, I am trying to grab my glasses. My eyesight is 800/10. That means my eyes are so bad that I am not part of of the 20 in "20/20" scale. What people with 20/20 vision can see in 10 800 feet, I can see in 10 feet. However, I could not find my glasses! I did not have time looking for them! I carry Andrea and I start to rock her. I look for my aunt and I could not find her. I look for my other aunt, but her location was unknown as well. I look for my sister. Of course, I could not find her either. Andrea is pointing at the kitchen. So I'm like oh she wants milk!! But she doesn't want milk after I gave her milk. She keeps saying "nameg." That is not a word in Tagalog, so I am very confused on what she means. She reaches for the freezer and tries to open it. I open the freezer door and she grabs a water-bottle from the freezer. She GULPS it down. I have never seen a 2-year-old chug water. Turns out she was meaning to say "lamig" which means cold, instead of "nameg." At this point. I. Still. Cannot. See. Clearly. I get closer to my lola who is trying fix up the house. I get as close to a clock as I can and see that it is 2 a.m. and I am so confused at where my family is. My lola is trying to turn on the electric fans, because we live in the province and most rooms do not have air-conditioning. Andrea is sweating so I can see why my lola was doing this. However, my lola did not have her cane. Then my lola pulls out the electric fan a little far where the cord is not resting on the floor. So at this point I'm thinking, "There is NO way I am going to have two year-old wailing and have my 86-year-old grandma trip over this cord while I cannot see clearly and I cannot find my family." So I  push back the electric fan and run, while carrying the toddler in my arms, and find my lola's cane. I gave it to my lola and told her to use it. FINALLY. Everyone is settled. My lola has her cane and stopped fixing the house at 2 a.m. and my niece stopped crying and chugging water. I bring them back to the room and lay my niece in the middle of me and my lola to prepare for bed again. All is well in the province. 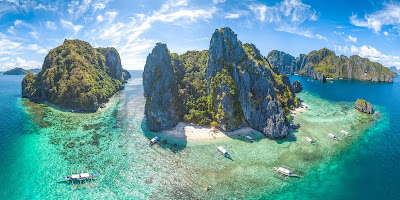 
Note:
I used first-person in this story because I wanted to walk my audience through my experience. I wanted them to know my thoughts. I wanted them to feel the uncertainty that I felt as I experienced this memory. I also wanted to use present tense for this reason, because I wanted the audience to feel that worry I felt. I tried to tell a story that was fun and light-hearted looking back at it know, even if it was stressful during the moment. I feel like there are many moments like this in life - but if we look back at it with a good attitude, it can become some of our favorite memories.
Posted by Zhanie at 11:57 AM No comments: This image is a cartoon representation of the jealousy Duryodhana has against Arjuna for capturing Drupada.
(Image Source)

Week 5 Story: Dance with the Me

It was the finale. Brighter lights! More cameras! Glitter everywhere! Fifteen minutes until Clara and I will dance our samba out on the ballroom floor.

Suddenly, I heard snickering coming from behind curtains. Then, constant chimes were ringing ding-a-ding! ding-a=ding! My phone was blowing up - text messages, GroupMe notification, missed calls! What was going on?

On my phone, I found the same picture sent to me hundreds of times: Clara and Elliot dancing. I could not believe it. Elliot was our biggest dance competitor. However, here Clara was spilling all our choreography to him. Did she want me to look like a fool?

(10 minutes until "places!" are called.) Clara approached me and said that I looked weak. Me? Weak? There was no way. I retaliated against her and said, "I am as strong as a lion. However, you may think Elliot is stronger. Why don't you just dance with him for the competition? You already showed him our choreography for the competition anyway!"

Clara looked at me offended. Then confused. Then sad.

"What are you talking about?" said Clara.

"Oh don't play innocent to me, Clara. I have all the evidence I need." I said as I pulled out my phone with the picture of her and Elliot.

Once again, Clara looked confused as she looked at the picture and said, "I wasn't showing him anything. Jen was out sick that day and Elliot just needed someone to practice their choreography with. Plus, you know Elliot! You two were best friends in middle school. If you don't trust me, you should at least know Elliot and remember who he was to you."

I angrily walked away. Who was she to tell me about my past? What gives her any right?

(5 minutes until showtime.) I found two of my buddies behind a curtain. Ahhhh, these were the two I heard snickering earlier. One of them told me, "Did you see Clara and Elliot man?! Why do you even put up with Clara?"

The other said, "You could dance with anyone! Throw her to the curb."

I paced up and down the hall. I really had no time left. I had to dance with Clara right? I should believe her. I saw a picture of her and Elliot not a video. But then again what about everyone who texted me? What are they going to think? They obviously believe that Clara is a cheater. Why shouldn't I believe them? I am panicking. I did have, however, Clara's understudy to step in if I need a partner for the dance!

What should I do?? 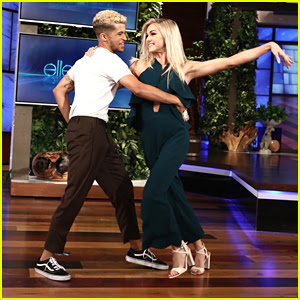 (Image Source)
This image, I would like to imagine, is the photo that the main character sees of Elliot and Clara dancing.

Sita Sings the Blues, Part B
By: Nina Pale

These notes are over the film Sita Sings the Blues, Part B. 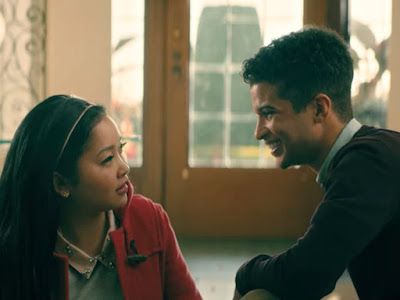 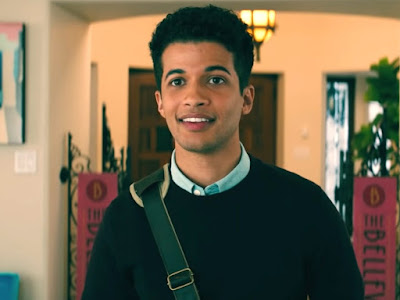 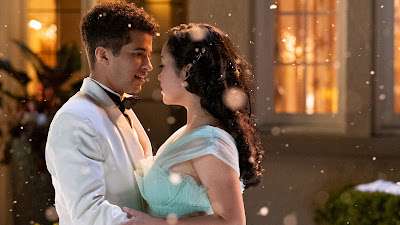 The three above images may be a stretch to relate the 2020 film of "To All the Boys P.S. I Still Love You" to Ramayana; however, I feel like there is a connection. (SPOILER ALERT to the movie!) Rama throws Sita to the side when pretty much she served him no more good. Similarly, Lara Jean (female on the right in the third picture) throws John Ambrose (guy in the white tux) to the curb when she didn't need him anymore and thought she had something better elsewhere.


Bibliography: Sita Sings the Blues, Part B by Nina Paley. Created 2008.
Posted by Zhanie at 11:44 AM No comments:

Sita Sings the Blues, Part A
By: Nina Pale

These notes are over the film Sita Sings the Blues, Part A.  There is a great focus on Sita and I love that! 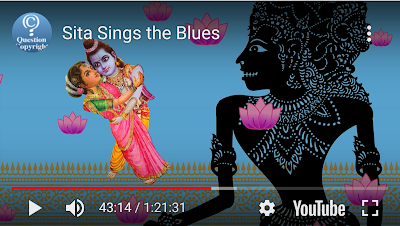 Rama and Sita forgive each other after (what seems to be) their first fight.
(Screenshot image of my favorite part of the film (at time 43:14) Sita Sings the Blues, Part A.)

Posted by Zhanie at 7:08 PM No comments:

As students and, in the future, as professionals (depending on our field of study), we will be sitting at a desk for loooooong hours. Personally, I know that in my profession, I will be sitting in front of a computer for big time blocks. Therefore, I wanted to learn about deskercizes that can help me keep blood flow through my body. I enjoyed the article Deskercise: 17 Exercises because it mentions an exercise that I always currently do sitting down: jogging my leg up and down. I did not know that this was an exercise! It definitely bothers some people, so I always stop when I become conscious that I am doing it. However, now that I know it is an exercise - there is no need for me to stop! Also, I really like the article 6 Yoga Exercises You Won't Be Embarrassed to Do at Your Desk. I love yoga so this article attracted my attention! My favorite pose was the Reverse Prayer Pose because firstly, I love to pray so this seemed fun, and secondly, I tried doing the pose and it was challenging. I love a good challenge! 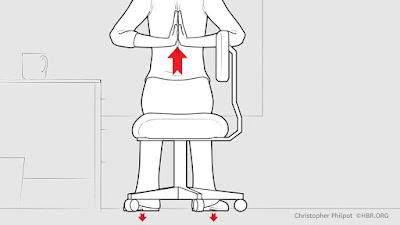 Reverse Prayer Pose as a Deskercize

Posted by Zhanie at 5:38 PM No comments:

Thank you for your feedback! 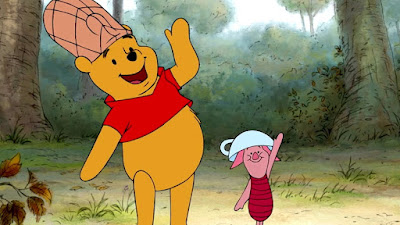 In my opinion, Winnie the Pooh is very wise with his big heart. Therefore, he depicts wisdom for me. (Image Source)